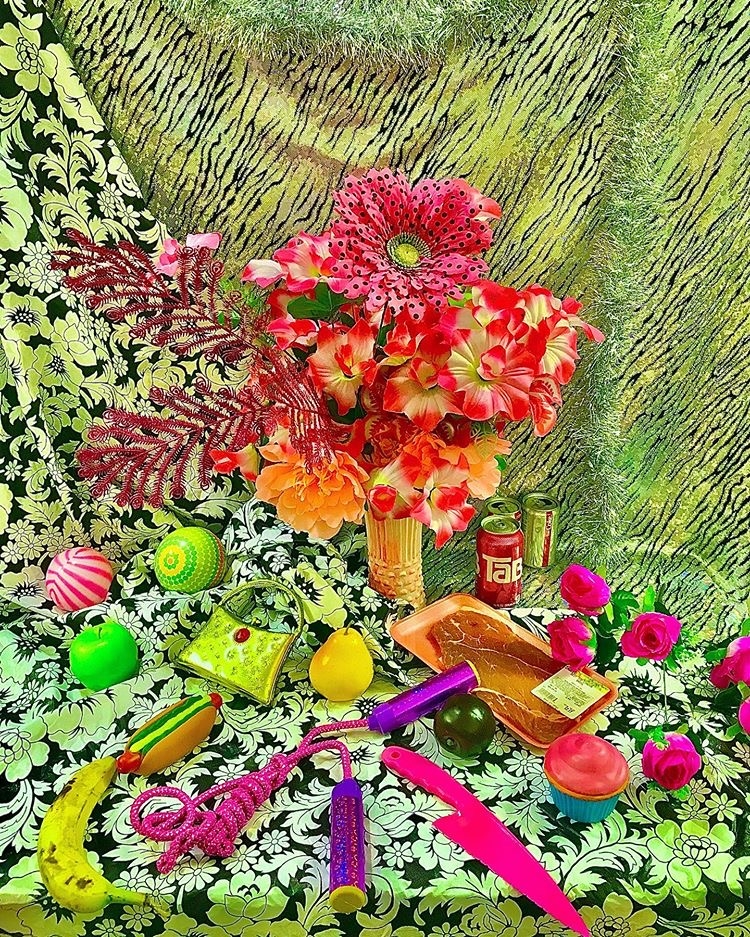 I am interested in documenting and exploring the complexities of issues related to female identity/my identity, popular culture and kitsch. As a visual artist, I create photo-based works. I make large-scale, 30”x40″ (and larger) still life photos and digitally printed large scale (4ft. and larger) vinyl banners. But these works have a twist. The objects used are atypical. Instead of the conventional apples and oranges of Cezanne, I may use junk food, plastic fruit, tchotchkes and items obtained from 99 cents stores. I also use different foods such as raw meat, fried chicken, cake and pizza. Quite often, my work references my upbringing in the suburban New Jersey of the 70s. In this place, I have found a dystopia of broken promises – a land where modernity, comfort and technology helped to maintain the emptiness found within the banal and status quo. As part of my working process, I collect and document these things on bright backgrounds of polyester spandex. When I was about three or four, I went with my family to see a Claus Oldenburg Pop Art survey show at MOMA in 1967. I can recall my parents pointing out a sculpture of French fries and a painting of a piece of cake. When I got back home to New Jersey, I painted a picture of a piece of cake with a cherry on top. I thought it was great that you could look at everything as art. I still believe this.

Melissa Eder received her B.F.A. in painting from Parsons School of Design in New York City where she studied with Sean Scully and a M.F.A. in combined media from Hunter College in New York City where she studied with Robert Morris and received a Meritorious Award from the Alumni Association. As a visual artist, her work has been shown nationally and internationally in such venues as the Bronx Museum of the Arts, New York University’s Broadway Windows Gallery, Art in General, the Aperture Foundation, the Humble Arts Foundation, the Whitney Houston Biennial, the Parlor Gallery, the Urban Institute of Contemporary Art, Grand Rapids, Michigan, the Charlotte Street Foundation’s Paragraph Gallery in Kansas City, Missouri and in Berlin, London and Korea. She was an artist-in-residence at the Henry Street Settlement in New York City, the Saltonstall Foundation in Ithaca, New York and the Atlantic Center for the Arts in New Smyrna Beach, Florida as selected by photographer Graciela Iturbide. In 2011, her work was selected by Eric C. Shiner, the former director of the Andy Warhol Museum for his curated exhibit on CurateNYC. During the summer of 2014, her work was included in the Aperture Foundation’s Summer Open and was chosen from over 860 applicants. She was selected to design a piano for the public art project for Sing for Hope, and it was displayed at Lincoln Center. She has received numerous grants including funding from the Puffin Foundation and two Manhattan Community Arts Fund grants from the Lower Manhattan Cultural Council. Her work has been reviewed by the New York Times, highlighted in Feature Shoot, Co Design, the Huffington Post, the Collector Daily, VICE and various other publications. She participated in the Satellite Art Show during Art Basel Miami 2016. She lives in New York City and works in Brooklyn as an artist in residence through the chashama studio residency. She was born in Long Branch, New Jersey. 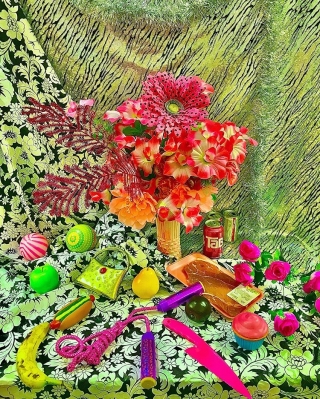